The Foxes midfielder started a stirring fightback from Brendan Rodgers’ troops at the King Power Stadium, with a 3-1 victory secured

James Maddison has suggested that Leicester’s game plan played out to perfection in a 3-1 victory over Liverpool, with the Foxes noting that the Reds look “vulnerable” on the counter-attack.

Brendan Rodgers enjoyed a notable victory over his former club on Saturday, with the reigning Premier League champions now with an uphill task to even qualify for the Champions League.

Maddison helped high-flying Leicester to three points, with the intervention of VAR seeing a second-half free-kick stand despite a flag being raised, and he claims a winning formula was implemented from the off against injury-ravaged opponents.

What has been said?

“Brilliant to beat them. It shows how far we have come,” England international Maddison told BBC Sport.

“We had a little change in shape and that changed the dynamic a little bit. With them missing Fabinho and Jordan Henderson in the middle [of midfield] they are probably a little more vulnerable on the counter-attack at the minute.”

Maddison added, to BT Sport: “We know when we play Liverpool it’s going to be tough, they can do both parts of the game very well. They can build and they can pass and they can be direct as well with Salah and Mane running behind.

“It’s a case of staying in the game. We’re a top team now with good quality, we know if we can get chances we’ll put them away. It showed.

“The more they start going for it, it opens up a bit for the likes of Barnesey (Harvey Barnes), playing on the last line, to run in behind and there’s more space on the counter-attack. So we utilised that brilliantly I think.”

Mohamed Salah broke the deadlock in an entertaining contest in the 67th minute.

Liverpool were looking to kick on from there, but Maddison levelled matters 12 minutes from time and sparked a late surge from the Foxes that saw them to three points.

Jamie Vardy got their second, as he benefited from another moment of madness from Alisson, while Harvey Barnes completed the scoring to pile pressure on the out-of-sorts Reds.

“It was a brilliant time for us to start [the comeback], then we looked a threat for the rest of the game,” Maddison added on a stirring fightback.

“Harvey Barnes has given a lot of full-backs a tough time. He is a terrific player. He is direct and fast. If you keep giving him the ball he will produce something for us.

“He won the free-kick for the goal. Credit to him, he was fantastic today, especially in the second half. As an attacking player you always have to chip in with goals and assists.”

Leicester have moved back into second spot in the Premier League table, one point ahead of Manchester United – who are not in action until Sunday – and six clear of Liverpool.

They are only four points adrift of leaders Manchester City, but have played two games more than Pep Guardiola’s side and are focused on wrapping up a top-four finish.

Maddison said, with the Foxes having missed out on a place among the European elite on the final day of the 2019-20 campaign: “The mentality has changed now. The heartache of not finishing in the Champions League last season has probably helped us in the long run.

“We sat down and looked at why we didn’t qualify. We are back in Europe this week and in the quarter-finals of the FA Cup so we are in a good position. We want to establish ourselves as a top team in the league now.” 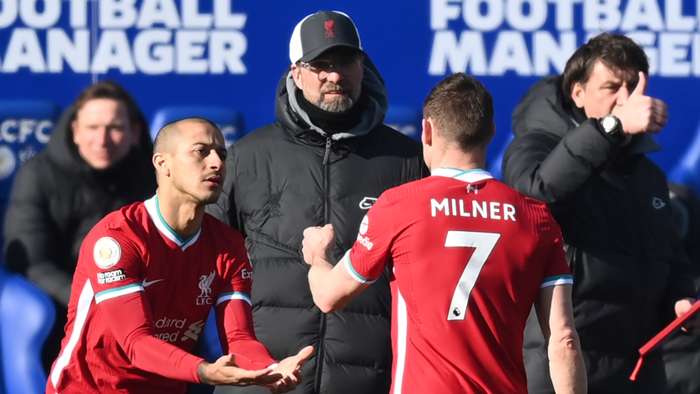